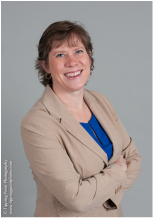 My name is Annisa Wanat and I want to be the next Alderman for the 33rd Ward.  After two decades leading multicultural teams in strengthening citizens’ voices to get better public services from their government, serving as Alderman is the perfect way for me to make an impact in my Albany Park neighborhood and the diverse 33rd Ward.

My passion for empowering communities originates from my Peace Corps service in Bulgaria, where I taught high school students, built a library, and advised municipal officials on public outreach.  After Bulgaria, I continued to serve in the Midwest by leading social justice communities as they advocated for poverty alleviation and health programs, mentoring university student groups on outreach, raising money for cancer research, and consulting with nonprofits on how to provide services more effectively.

I’ve also had the privilege of mentoring government and civic leaders around the world as they navigated the challenges of holding elections, educating citizens on policy issues, and advocating for improved public services.  From Chicago to South Sudan to Afghanistan, I’ve learned that the issues people care most about are the same world-wide.  Because of  my commitment to strengthening public services, I have experience in numerous policy areas, including education, infrastructure, and job creation programs, as well as advocating to make governments more transparent and accountable.

Right now our city is battling serious problems.  Corruption and nepotism infect our government.  Our children are exposed to violence.  Neighborhood schools are denied funds while our tax dollars are used to build stadiums.  Our public services are irresponsibly privatized and our pensions have been cut.  All of this is done behind closed doors because our politicians put their own interests ahead of ours.  The 2015 election is our chance to hold politicians accountable.

We make better decisions when we make them together, and as Alderman in the 33rd Ward, I will lead the Ward in public discussions to develop a plan to build a stronger community with safer streets, where we can promote small business and raise families.  I will fight for a city budget that reflects the values of our hard working families by reforming TIF and stopping the privatization of public services.  I will fight for policies that support our neighborhood schools.

As Alderman, I will be the fresh blood and the independent voice the 33rd Ward needs to fight for a new Chicago Way in the City Council.

I am a member of the Local School Council at Albany Park Multicultural Academy, I tutor at the Albany Park Community Center, and I am an active member of several neighborhood groups. I volunteer for Mikva Challenge and Chicago Votes and am a member of the Chicago Area Peace Corps Association.  I have a Bachelor in Education from Miami University and a Master of Arts in Russian and East European Studies and a Master of Public Affairs from Indiana University.  I have worked on four continents and speak Bulgarian, German, Serbian, and Spanish.